Robins victorious as Rovers see red at the County Ground

Saturday the 18th of August marked the third match I’ve attended this month, which is a remarkable statistic for me. For fans who can follow their team every weekend, home and away, three games in one month might not seem anything to write home about, but for me it’s significant, as unfortunately I’m not always available to travel to as many games as I’d perhaps like. As a non-London dwelling Arsenal fan, it’s not financially viable to watch them in the flesh very often.

Nevertheless, I found myself in Swindon for my first Tranmere Rovers game of the new season. Rovers, my adopted team from Birkenhead, have had a solid start to life back in the football league, and arrived at Swindon’s County Ground with 4 points from their first two games, including a home win against Cheltenham last week.

Matt, my life-long Tranmere-supporting friend and chief enabler of my Rovers fandom, had managed to get us a pair of tickets in the away end for the day, thus marking my first official game as a travelling member of the SWA (Super White Army for those not accustomed to the Tranmere faithful). It was my first time seeing Tranmere since their promotion to League Two, and I was excited to see the familiar faces in Micky Mellon’s squad, as well as some of the new additions.

That fateful day the ten men of Tranmere were victorious at Wembley, two thoughts went through my mind; The first, I’m afraid to admit, was my excitement at getting to play with them on this year’s edition of FIFA. The second, and more important, was my newfound access to see the Rovers in person.

Their promotion to League Two has given me the opportunity to see them at Cheltenham, Newport, Exeter, and a few more grounds in the southwest this season. Unfortunately I’m only going to visit Prenton Park maybe once or twice a year, but now I have the chance to see the Rovers away from home on a more regular basis. Their game against Swindon was the first fixture I circled on my calendar, and I was glad it came so early on in the season.

I caught a midday London-bound train and met Matt at Swindon station. The walk to the County Ground was very short and simple, and upon arrival we bought lunch from one of the burger vans close to the Arkell’s Stand. As is my custom, I picked up a matchday programme from a lovely lady at her stand, and we had a brief chat about both team’s chances before kick-off. Every member of staff we met could not have been nicer, so credit to Swindon Town for being such great hosts.

As we made our way toward the away supporter’s Bar 71, we spotted Dave, editor of Tranmere fanzine Give Us An R. Upon our approach he already had his arm outstretched holding the latest issue and was nice enough to give me a copy. Issue 119 features my matchday report from April’s home win against Aldershot, so if you’re at a Tranmere game this year make sure you pick it up and continue supporting fanzines like GUAR. Print is not dead and we should do everything we can to keep football fanzines alive. 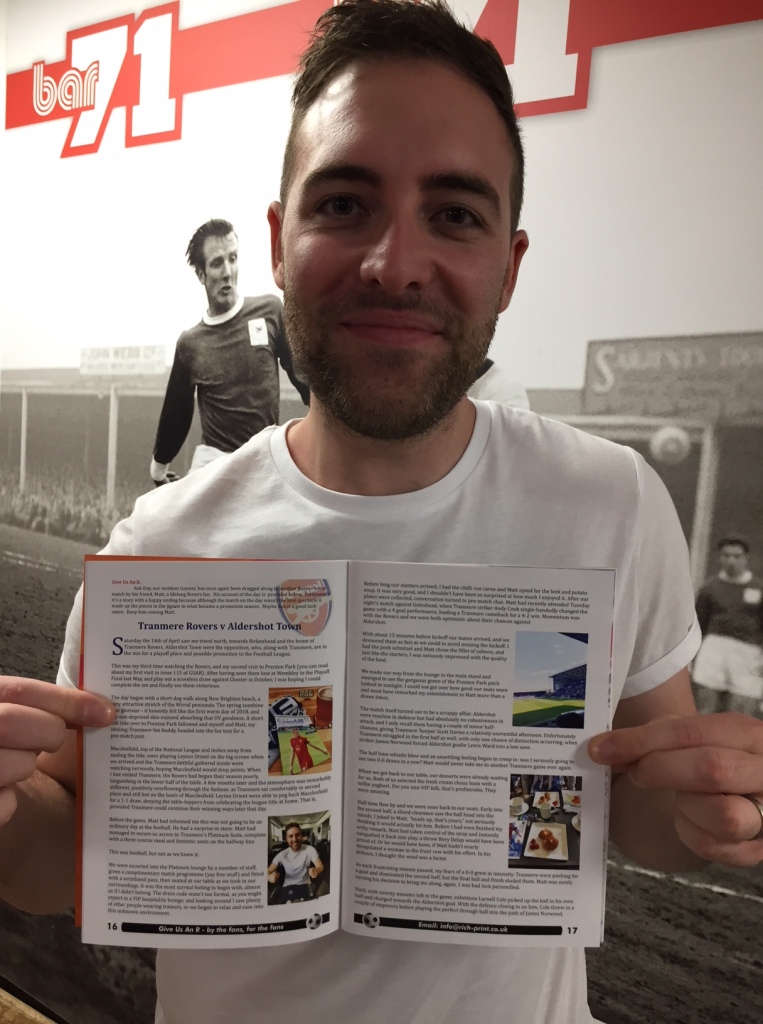 We entered the relatively small bar about an hour before kick-off and caught the end of Cardiff vs Newcastle, the day’s early game. Matt and I enjoyed a Peroni each (£10.40 for two pints though) whilst watching Newcastle’s Kenedy miss an abysmal last-minute penalty, and half an hour later we made the short climb up into the stands to find a perch for the match. Our £23 tickets gave us our choice of seats and since we’d arrived whilst the players were still going through warm-ups, we had the pick of vantage points. The Arkell’s Stand had a narrow stanchion slightly obstructing our sightline but we made sure to choose seats so it didn’t impact our view of the goals.

The match got underway and Tranmere instantly put down a marker that they would not be one of those newly-promoted sides who would merely lay down and roll over. Within ten minutes they had taken the lead.

On the edge of the Swindon penalty area, striker James Norwood split the defence with a ball into Connor Jennings, entering from the left wing. Jennings opened his body to play a pass across the box, that the outstretched forward Cole Stockton narrowly missed converting. Thankfully Jonny Smith, on loan from Bristol City, arrived from the opposite wing unmarked to tap the ball home at the back post to give Tranmere a deserved 1-0 lead. The SWA were in full voice for the celebrations and every fan around us was ecstatic.

Tranmere didn’t relent and were able to double their lead just three minutes later. A goal-kick from ‘keeper Scott Davies reached the head of Stockton, whose neat flick-on found Norwood. The Tranmere number ten got goalside of his defender and used the outside of his right boot to slide the ball beyond the Swindon goalie Lawrence Vigouroux to make it 2-0. We couldn’t believe our luck, to have such a commanding lead after less than quarter of an hour, away from home. Norwood already has 4 league goals this season, and has thoroughly embraced his status as Tranmere talisman.

Our jubilation wasn’t to last though. Just five minutes later Jay Harris, the tenacious Rovers midfielder, made a shocking “tackle” on Swindon’s Martin Smith and the referee pulled out his red card without any hesitation. From where I was sat, I could only see Harris’ back, and didn’t see at the time just how high he planted his foot on Smith’s leg. It was a reckless and needless challenge, and became the turning point in the game.

From that point on, Tranmere fell apart. The visitors had been in complete control and looked set to put more goals past Swindon, whose fans had grown more and more restless. Now with an extra man in midfield, the Robins began to impose themselves.

Just a couple of minutes after Harris was dismissed, Swindon struck. Striker Elijah Adebayo, on-loan from Fulham, got the better of Rovers right back Jake Caprice and poked home to get his side back in the game. Adebayo was a menace all afternoon and was Swindon’s best player by a country mile. His goal was well taken but his build-up play and ball retention impressed me even more. The youngster was almost unplayable once Tranmere were reduced to ten men. 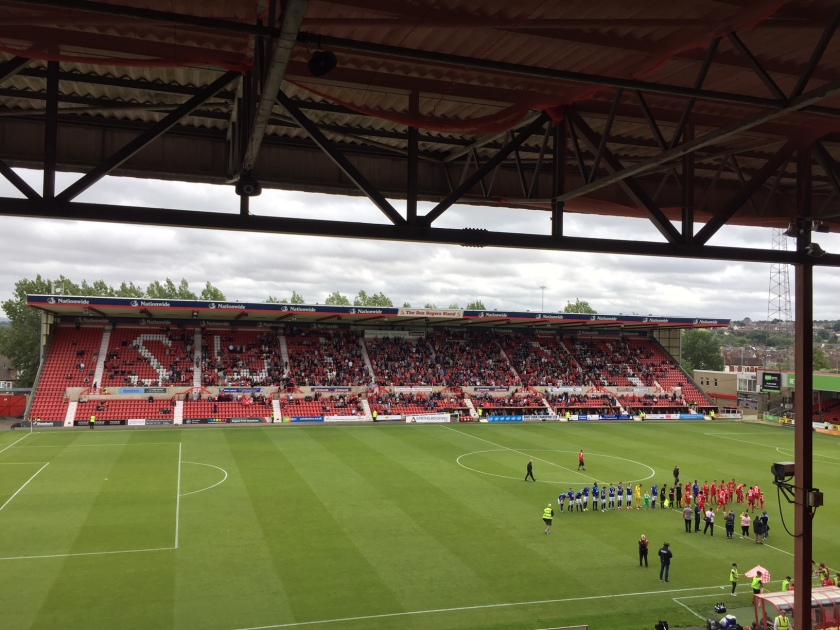 Rovers did well to make it to half time with their lead intact but could only stave off the Swindon pressure for so long. With an hour gone the hosts easily bypassed the Rovers’ defence and a simple ball across the box was swept home by Marc Richards for the Swindon equaliser. It felt inevitable to be honest, as Tranmere had spent so long doing their best to repel attack after attack.

The players were exhausted from the effort, and this was no more evident than when Jonny Smith, probably Tranmere’s most positive player of the day, burst onto a loose ball in the middle of the park and nearly had a one-on-one with the Swindon keeper, before kind of giving up on it. He was undoubtedly knackered and you could tell he could give no more. The impressive 21 year-old was substituted directly after, but the signs are there for him to be a big player for Tranmere this season.

In the 72nd minute the Swindon comeback was complete, but it was a catastrophic goal to concede. From a corner, Steven Alzate was afforded too much space on the left side of the penalty area and his low cross was met by Robins defender Joe Romanski. The 18 year-old centre back, in an attempt to control the ball, smashed it off both shins and the ball trickled past the wrong-footed Davies in goal, softly nestling in the back of the net. Even with a man down, it was an awful goal to give away and the Tranmere players were furious.

Sadly, so were a minority of the away fans behind us, who let the red mist get the better of them. It’s not the sort of behaviour you want to see at football, and it has no place in the game anymore. The Swindon fans we spoke to after the game could not have been nicer, and hopefully the little scuffle didn’t diminish their opinion of the majority of us.

Despite the result, I enjoyed my first away day with Tranmere and eagerly await my next trip to see them play. Before Harris received his marching orders, they had looked the superior team and if they can continue to display that sort of form, the Rovers should have no problem competing at this level. Centre back Mark Ellis was my standout player of the day, and looked exceptional in the heart of the Tranmere defence. He rarely looked overmatched and dealt with everything that came his way.

We applauded the team off the pitch and made our exit, managing to grab a train home that got us to the pub in time to see most of the Arsenal game away at Chelsea.

What are the odds that both of your teams lose 3-2 on the same day? Sometimes it’s just not meant to be.