Everything was set up for a perfect Saturday. In the morning I had planned to meet my friends in the pub and settle into a prime spot for the North London Derby. The afternoon would be spent at nearby Twerton Park, taking in Bath City’s promotion push against Truro City. I had it all mapped out, a great day of football.

Then an offer too good to refuse just dropped in my lap.

How would you like two tickets to go see Bournemouth take on Manchester City? For free?

I would have been mad to turn down such an opportunity, and so it was that I found myself on a train bound for sunny Bournemouth, and not in the cosy confines of the local pub.

Born and raised in the shires of south Dorset, a journey back to the county of my birth is always a trip I enjoy, and having only recently visited Bournemouth in the summer, I was excited to return and see Eddie Howe’s Cherries once again. The hosts had the unenviable task of facing Pep Guardiola’s squad of stars, the sky blue juggernaut that is Manchester City. A tiny part of me must admit how excited I was at the prospect of seeing those world class players in person. 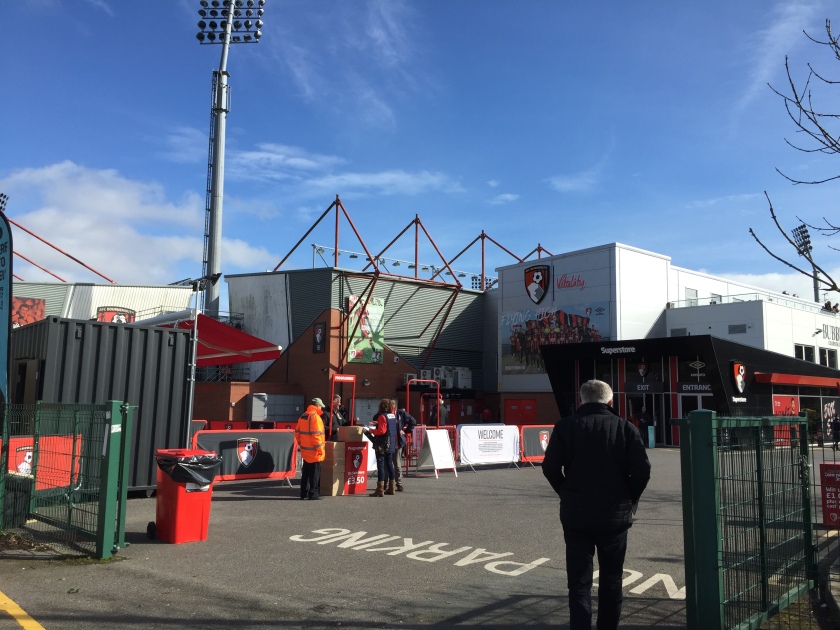 Before I delve too deep into the details of this trip, I should probably answer the question you’re surely asking:

How did you get these tickets for FREE?

Camila, our dearest friend and fellow Bath City supporter, was able to acquire the pair of tickets from a friend of hers but sadly for Camila, work commitments prevented her from attending, which is how they found their way into the grubby mitts of Caleb and I. Camila, being the best person in the world, offered them to us at no charge, purely out of kindness (and possibly blackmail… what does she have on me?) There are not enough thank yous in the world to bestow upon our favourite Colombian, but hopefully this little gift will show some of our appreciation.

Thanks to her incredible generosity, Caleb and I pulled into Bournemouth station at midday and met my uncle, a fan of the Cherries for over 60 years. A short drive to the ground followed and as it was Caleb’s first visit to the Vitality, a trip to the club store was a must. The club had their replica shirts reduced by 50%, down to the bargain price of £22.50, and it took all my willpower to resist purchasing one. I had already succumbed to temptation on my last visit, buying one of the navy Umbro training jackets (seen in this post’s pics), but the thought of adding another football shirt to my collection definitely crossed my mind. 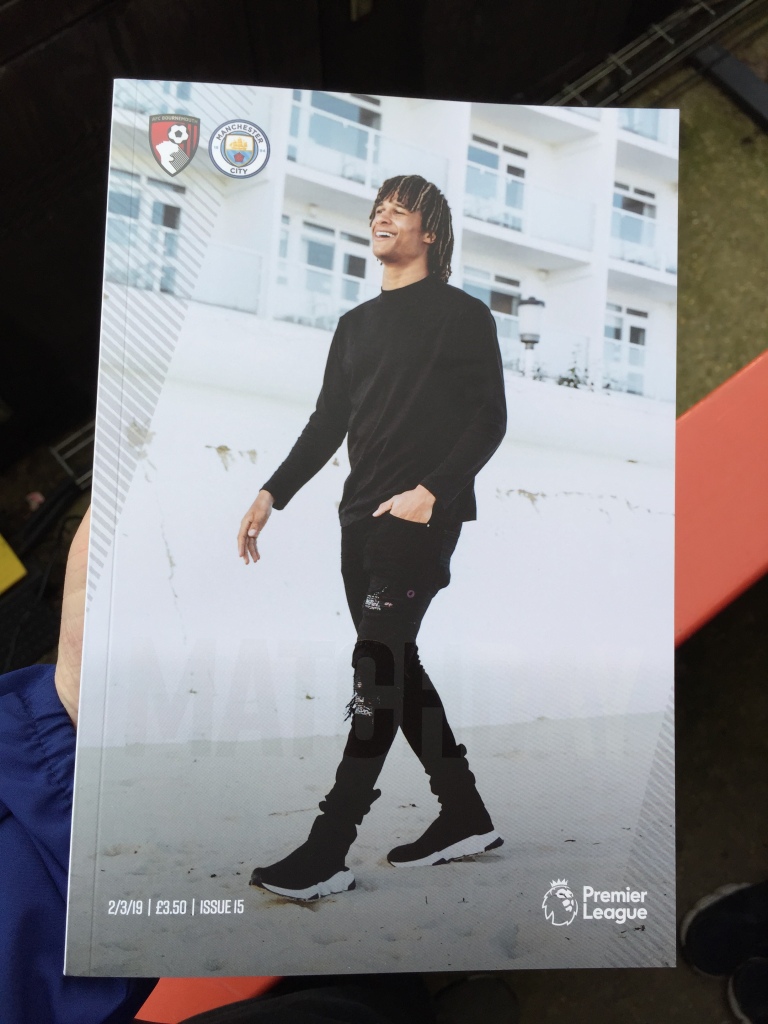 As kickoff to the North London derby approached, the three of us made our way to the 1910 club bar so we could watch the game on their big screens. My uncle was very patient indulging two Arsenal fans for 90 minutes and a late penalty miss. He was even kind enough not to pile on our misery at dropping two points. Despite the result, the bar was a great place to enjoy the game, a very relaxed atmosphere and it was quick and easy to get drinks.

When the final whistle blew at Wembley we left the bar and went straight into the ground, just as the teams were completing their warm-ups. Being in the southern stand we had the Man City players in front of us and for about 5-10 minutes we geeked out. “Oh my god that’s Aguero! There’s Sterling! Look how close we are to Ederson, I can see his shit neck tattoo!” I must admit I was a little giddy to see Mikel Arteta just a few feet away as well, one of my favourite Arsenal midfielders in recent years and Pep’s right-hand man. 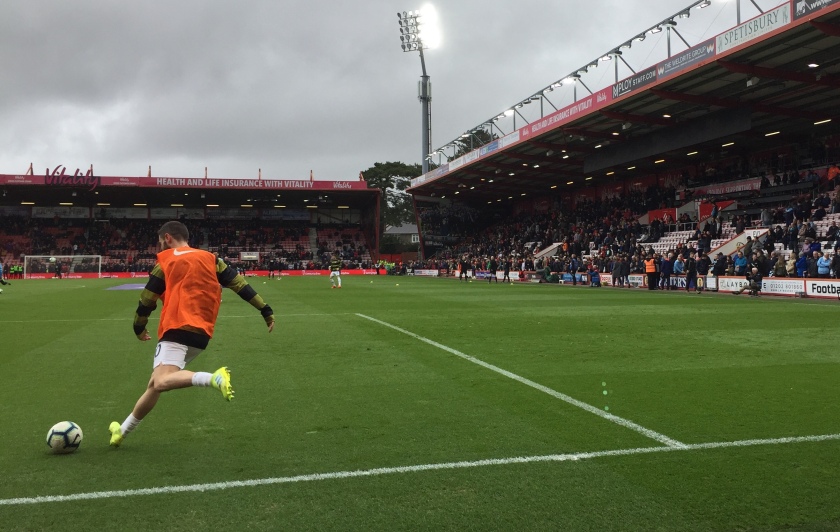 The sunshine in the morning had disappeared by this stage and the sea breeze off the coast brought it’s distinctive winter chill. It finally felt like attending a game in early March. We found our seats (with generous legroom) and settled in for the show.

The game was a tightly contested affair, albeit dominated entirely by the team in blue. That sentence may seem contradictory but Bournemouth were impressive in their organisation and resilience, and did a fantastic job containing the City threat. Bournemouth’s Dutch centre back Nathan Ake stood out in particular, and shepherded his defensive line to repel the City attacks again and again.

With the visitors enjoying 82% of possession, Bournemouth were so busy defending that whenever they did win the ball, they couldn’t do anything with it. Even young playmaker David Brooks, a revelation since signing last summer, was unable to get the Bournemouth attack going. The hosts were simply missing too many key players to give City a real test, as Callum Wilson, Lewis Cook, Jefferson Lerma, and a host of others missed out due to injury or suspension. Bournemouth ended the game with nothing to show in terms of attacking purpose: no shots, no shots on target, not even a lousy corner. 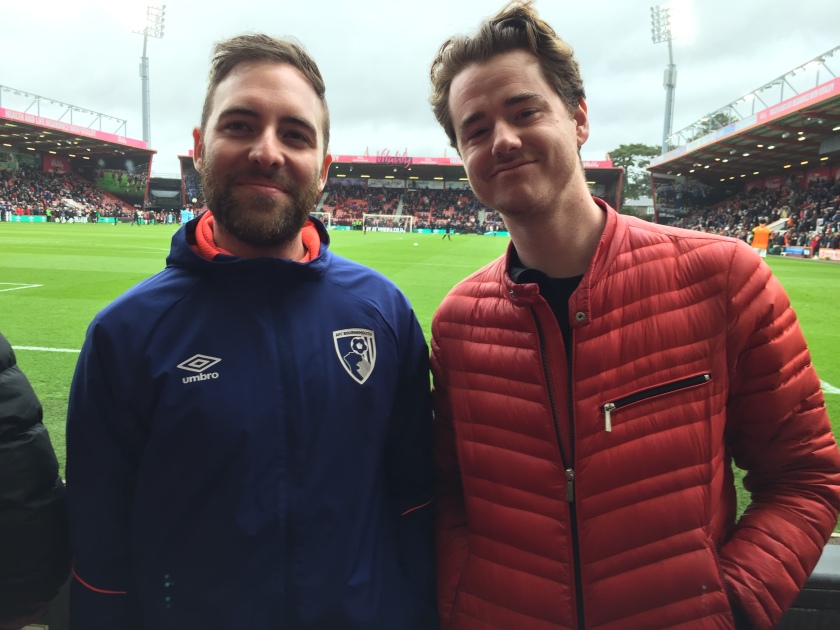 City on the other hand were essentially flawless, with Guardiola classing this as one of their best ever performances in his post-match interview. At times it was like watching a training ground exercise, the players were so at ease keeping the ball, moving it around to tease the Bournemouth players out of position. Defensively, they never let Bournemouth enjoy a moment on the ball without pressure from every angle.

Even when Kevin De Bruyne and John Stones were forced into substitution through injury, City’s rhythm and playing style was not effected in the slightest.

In fact, it was substitute Riyad Mahrez who got the goal to secure the result for his Manchester brethren. Ten minutes into the second half and with City’s pressure starting to mount, young Ukrainian left back Oleksandr Zinchenko (who was immense all day) worked well down the flank to get the ball to David Silva. The Spaniard brought the ball under control and fed it out wide to Mahrez, whose first time strike seemed a little scruffy, but had enough zip to beat Artur Boruc at his near post. On the replay, Boruc will be devastated he let the relatively tame effort get by him without more resistance. 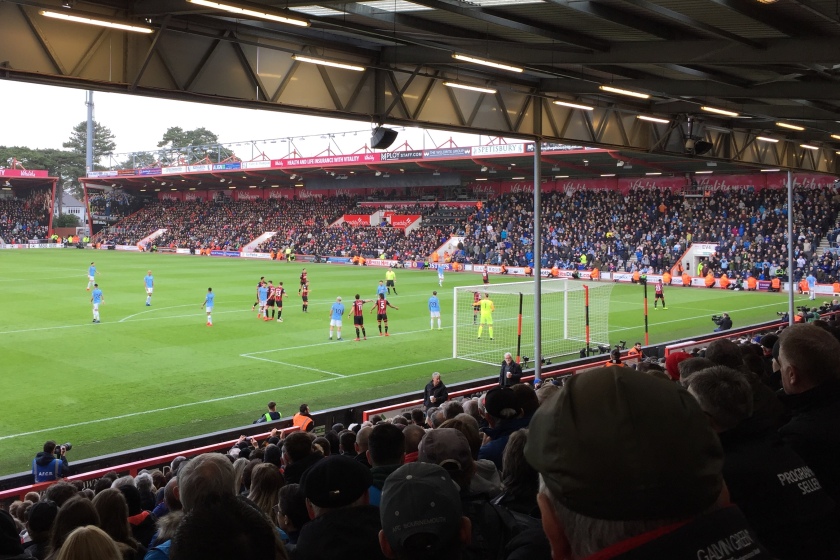 After the restart Boruc did everything in his power to redeem himself, as he single-handedly kept the scoreline respectable for the rest of the afternoon. City’s hold on the game only intensified when they took the lead and multiple efforts from Aguero, Sterling and Mahrez were all beaten away by the big Pole in goal. He deserved the man of the match award for keeping the result from getting out of hand.

Sadly his teammates were unable to muster any sort of response in the face of such overwhelming superiority. City simply had a better player in every position, and that’s to be expected given the financial gap between the two clubs (which I hate and disagree with immensely, but that’s a topic for another time). Even with the disappointing result, Bournemouth can take solace they weren’t on the end of a hammering like so many experience against Guardiola sides.

Eventually the referee brought an end to proceedings and we made our way out of the ground to the sight of the City players celebrating in front of their travelling support.

Despite wanting to see Bournemouth win (if I had such a thing as a second team, they would probably be it), I have to admit that seeing players like Aguero and Sterling at the peak of their powers, and just metres away from me, was a sight to behold.

That aspect of the football experience, seeing the best players in the world, is still a novelty to me, and one I treasure at that. I hope that feeling never wears off.