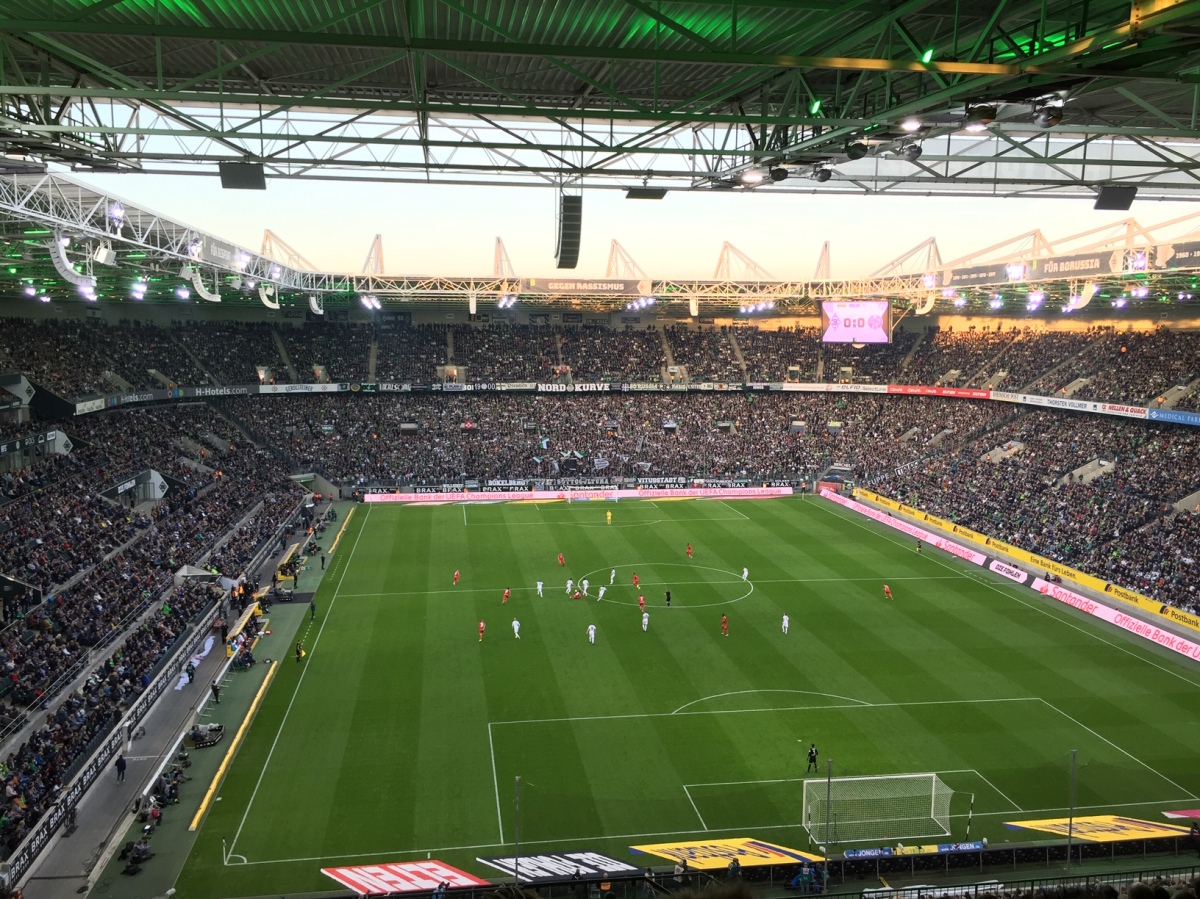 The last leg of our west German Bundesliga tour began in the same fashion as the previous day, by loading up on the all-you-can-eat buffet breakfast at our Holiday Inn. We had another evening game ahead of us, 6pm local time, so there was no rush in the morning as we slowly got ourselves respectable, before walking into the city centre of Düsseldorf once again.

By midday we were strolling along the banks of the Rhine to see Düsseldorf’s famous Rheinturm, a 240-metre high communications tower that dominates the skyline. A little ice cream van was nearby the tower’s base so we each enjoyed a couple of stracciatella scoops, and then admired the riverside views on a lazy Sunday. 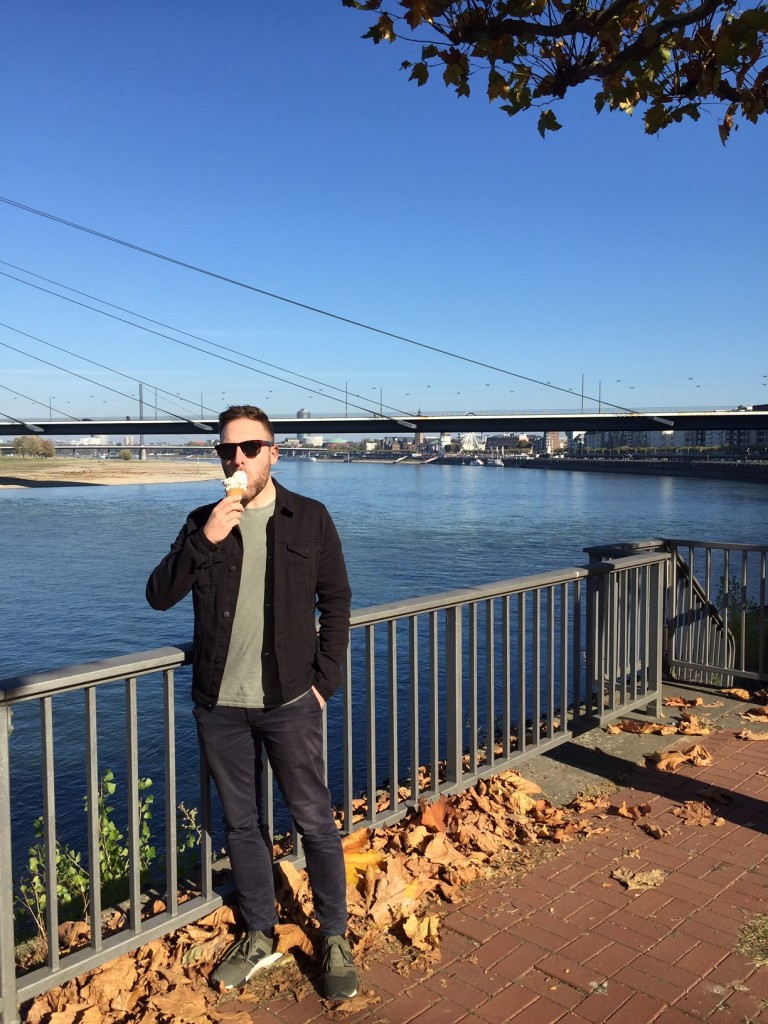 Before departing Düsseldorf we stopped into a couple of bars to enjoy a few more of the local Altbiers. It was such a nice day that it would have been a shame not to, and I developed quite a taste for them by this stage.

The agenda for the day was a trip to nearby Mönchengladbach, just a short train ride west of Düsseldorf and home to Borussia Mönchengladbach, five time Bundesliga champions. “Die Fohlen” (“The Foals”) are still globally recognised thanks largely to their achievements in the seventies, when their celebrated young team played fast, attacking football. They enjoyed a great deal of success on the European stage and are still one of the largest and most supported clubs in Germany. They played host to 1. FSV Mainz 05 (or Mainz as I will simply refer to them from now), and it was probably the game of trip I was most looking forward to seeing. 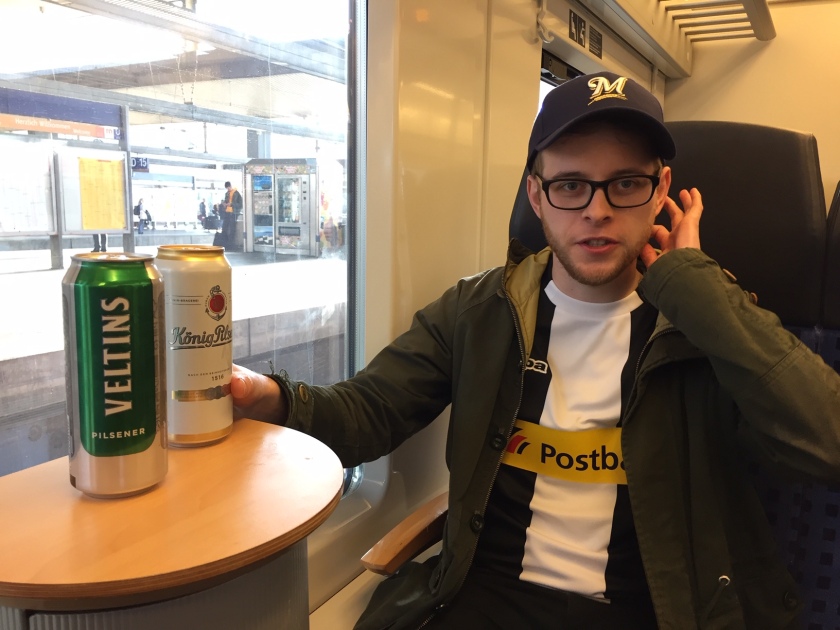 We finished our drinks in the bar and hopped on a tram to Düsseldorf station, before catching the train to Mönchengladbach, equipped with train beers for the journey (of course). Upon arrival we immediately found shuttle buses parked outside the station, full of local fans clad in the white, black and green of the Gladbach faithful. The shade of green the club use in their iconography is my favourite colour and even though I’m too old to have such a thing as a favourite colour, nevertheless I do. As a result, Borussia earn huge points with me aesthetically. In fact, ahead of the trip I had researched all the teams we were set to see, to check if any of the clubs had particularly nice kits that I would consider purchasing, and Mönchengladbach emerged victorious. Their Puma designed shirts this season are sublime and I had set my sights on buying one during our trip.

The shuttle bus weaved through the streets of Mönchengladbach before dropping us at the door of Borussia-Park, their 54,010 capacity home, opened in 2004. We had arrived with a couple of hours to spare and I couldn’t contain my excitement for buying some gear any longer, so we headed straight to the club shop. 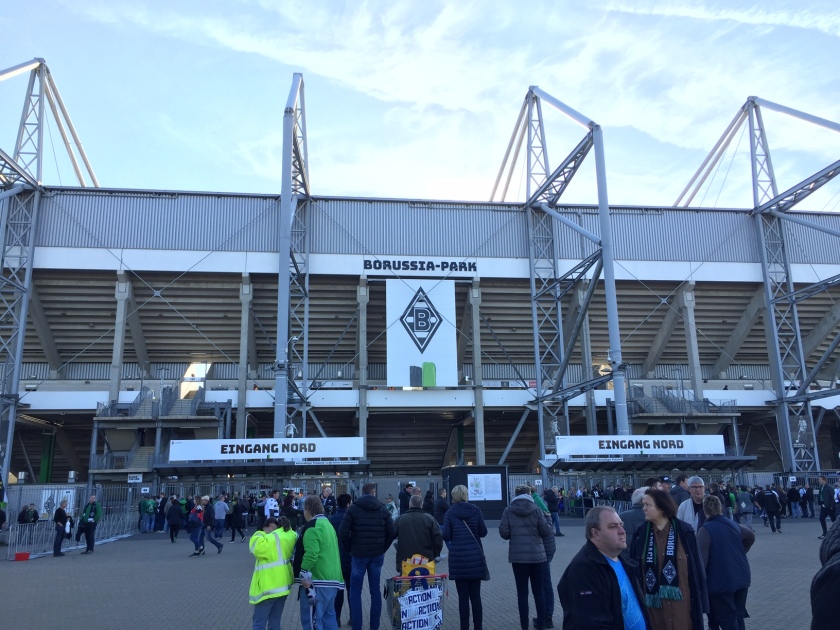 Once inside I knew immediately what my primary purchase was going to be: this season’s Mönchengladbach away shirt, an attractive black strip with a green marled effect spreading upwards to the shoulders and collar. It wasn’t cheap, setting me back almost €90, but I fell for it immediately and the heart wants what the heart wants. Matt had already purchased his Gladbach shirt the previous day in Düsseldorf but he couldn’t resist the black, white and green bar scarves that we’d seen so many fans wearing around the ground. Naturally I had to get one too, and it’s stylish enough that I can wear it away from the football. At least that’s how I explained the purchase to myself (and my wife).

With the sun still shining we set up camp in the fanpark to enjoy a beer and catch some of the early afternoon kickoff between Hertha Berlin and SC Freiburg on the park’s big screen. Just like our trip to Schalke the previous day, every fan I saw was draped in the club’s colours and the whole look really adds to the appeal of the Bundesliga. The only Gladbach player I had serious knowledge of before our trip was their former captain Granit Xhaka, and despite his transfer to my beloved Arsenal over two years ago, I still saw a great deal of Xhaka shirts dotted around the outskirts of the stadium. It seems the Swiss midfielder is still regarded fondly by the majority of Mönchengladbach supporters. Die Fohlen actually have a history of recruiting Swiss players and currently have five key contributors in their first team squad: Michael Lang, Denis Zakaria, Josep Drmić, Nico Elvedi, and their shot-stopper extraordinaire with the best barnet in the Bundesliga, Yann Sommer. 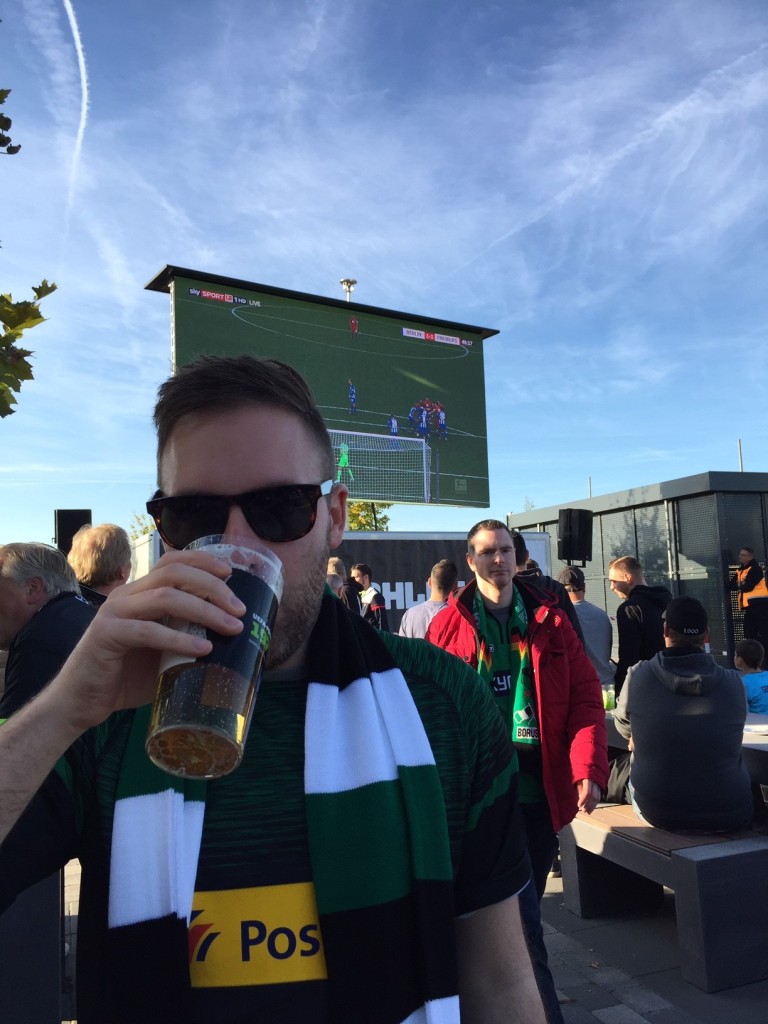 As the warmth from the setting sun began to diminish, I pulled my scarf around me and followed the masses through the turnstiles and into the stadium. My first impression of Borussia-Park was it’s incredibly close atmosphere, which surprised me for a stadium that surpassed 50,000. We had seats at the very back of the southern top tier, opposite Mönchengladbach’s impressive Nordkurve, and despite being at the back we had a perfect view thanks to the unobstructed sight-lines.

To our right were the Mainz supporters in the corner, who sadly didn’t travel in great numbers. The chosen few who had made the journey were vocal enough, and even brought a drum to lift their team, but there were large pockets of empty seats surrounding their main group.

We were very fortunate to have picked such an opportune time to visit Borussia Mönchengladbach, who had only recently beaten the mighty Bayern Munich away from home, 3-0. With the team and their fans still flying high from that result, we settled in to watch them battle it out with Mainz. 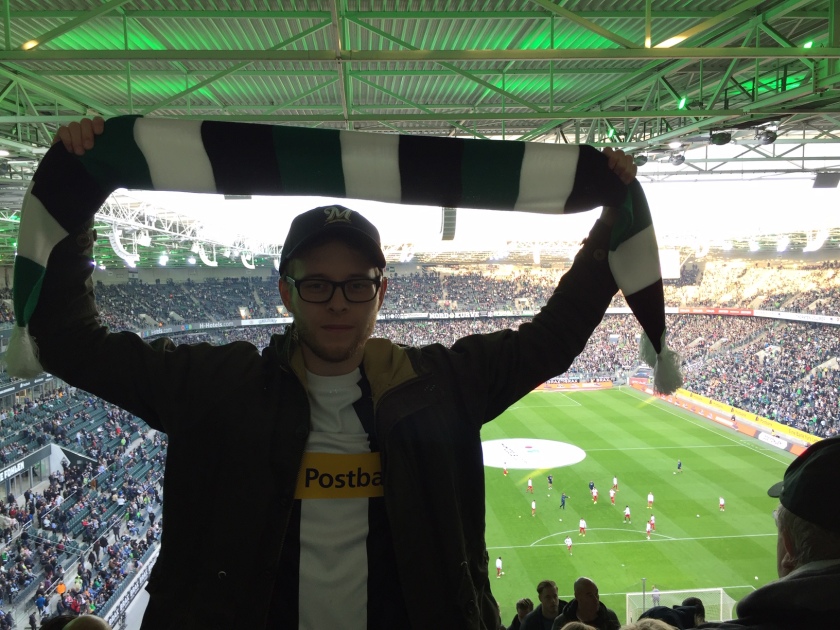 It was the visitors who had the first real chance of note, when a stray pass from centre back Nico Elvedi fell right into the lap of Mainz striker Jean-Philippe Mateta, whose low shot troubled Sommer in the Gladbach goal but fell harmlessly wide of the post. In England we would call the effort a “daisy cutter.”

Before long the hosts increased the pressure and made it count, when they took the lead with just over 20 minutes played. Some well worked build-up play found Gladbach’s Belgian playmaker Thorgan Hazard in acres of space, with the Mainz backline at his mercy. Hazard expertly slipped a through ball into the path of Jonas Hofmann that completely took the defence out of play, and the German’s perfectly placed first-time shot clipped in off the post. As he wheeled away in celebration, a combination of the crowd and the PA system deafened us, and the old fella seated next to me rose in applause. It turned out to be Hofmann’s first goal in open play for Mönchengladbach and there was still more yet to come.

Mainz continued to hustle in midfield, endlessly pressing their opposition, but their efforts were not rewarded and their attacks often broke down in the final third. In the early stages of the second half, Mönchengladbach shifted into a higher gear and proceeded to put the result beyond doubt.

It began with another fluid move by the Gladbach midfielders. When the ball reached striker Lars Stindl on the edge of Mainz’s penalty box, many would have presumed the captain would maneuver to unleash a shot, but instead he played an incisive pass behind the Mainz defence, into the path of the rapid Hazard, bursting in from the right wing. Hazard produced a low, teasing cross right in front of the outstretched goalkeeper Florian Müller and Hofmann was available at the far post to tap the ball in, completely unmarked, to give the home side a 2-0 lead. 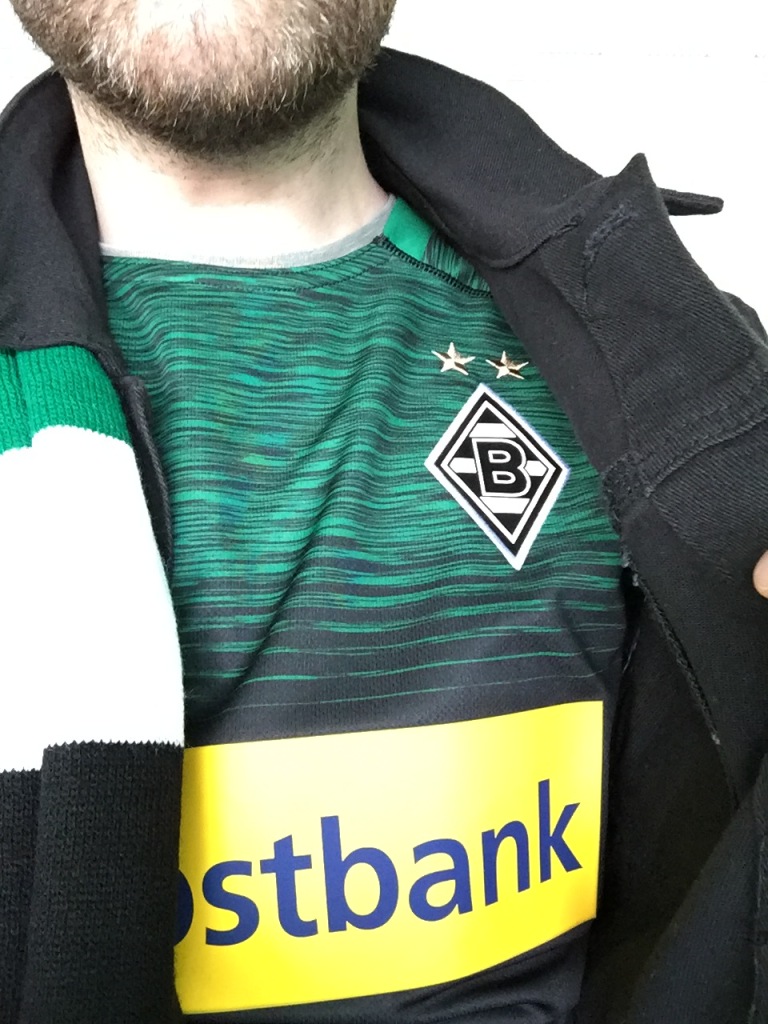 Five minutes later, Mainz were caught out again. Die Fohlen burst forward at great pace and released their French forward Alassane Plea clear down the left flank. Before the defence closed in on Plea he crossed to Hazard, who had gotten the best of the scrambling Mainz left back, and found himself totally in the clear. Hazard shot without hesitation, and the ball looped over a stranded Müller in goal to make it 3-0 with just under an hour on the clock.

Sat to our left were a group of young German lads, who were ecstatic watching their side ruthlessly pick apart what had previously been a resolute Mainz team. These guys couldn’t have been much older than 15 or 16, and not one of them had ever shaved, but they regularly returned from the bar with multiple pints. They were a source of much amusement to Matt and I, as they discussed and dissected the game in German, before choosing to switch to English for moments when they were especially enthusiastic about their team. It was great fun hearing the lads nod in agreement that Gladbach were “very nice,” and it made the occasion especially memorable.

Despite having a three goal lead the hosts were not finished yet, as the small matter of Herr Hofmann’s hat trick had yet to be settled. The 26 year-old was likely content with his brace but made the day extra special when he collected his third goal to complete a dominant 10-minute period for Borussia Mönchengladbach.

With the Mainz defence completely at sea and devoid of all organisation, Hofmann made a run over the halfway line, beating the haphazard offside trap. Müller came rushing out of his goal in a panic, but Hofmann rounded him with ease, his first touch taking the ball clear of the goalkeeper and into space. The midfielder composed himself before coolly finishing into the unguarded net. Hofmann jogged over to celebrate with his teammates with his hands on his head, displaying disbelief that he could enjoy such a day, his first career hat trick. He deservedly collected the match ball at the final whistle, which will be undoubtedly be displayed in his trophy cabinet at home with immense pride. Both Matt and I were overjoyed to have witnessed Hofmann’s historic moment. 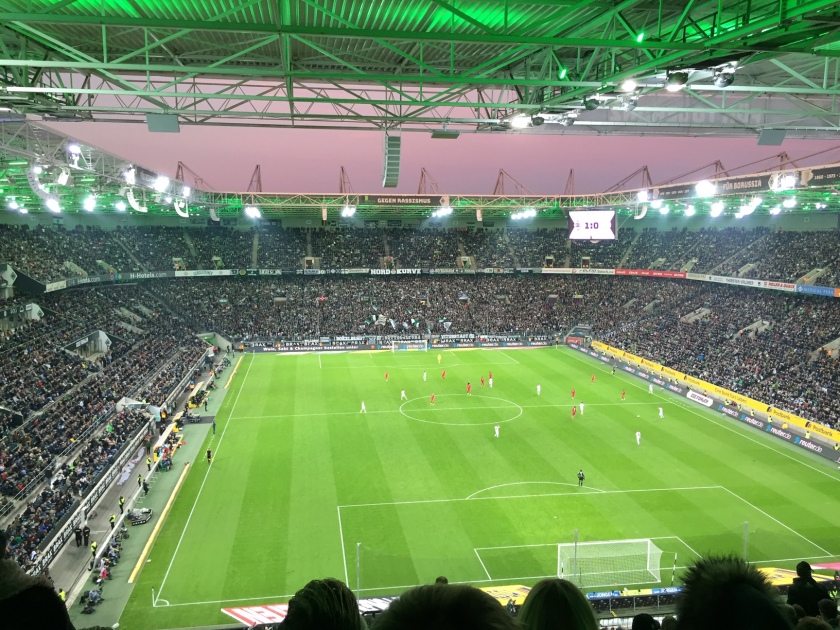 After the disappointment of seeing Schalke go goalless at home the day before, it was such a relief to see Borussia Mönchengladbach turn on the style for us, routing Mainz 4-0. It had been the game I was most excited to see before we flew out to Germany and thankfully Die Fohlen rewarded us with a flawless performance.

As we filed out of our row and made for the exit, I could see the victorious players congregated in front of the Nordkurve, linked arm-in-arm, bouncing up and down in front of their raucous and jubilant supporters.

It was the perfect end to the trip, and the songs from the Gladbach fans were still ringing in my ears on the shuttle, the train, and even the plane home. 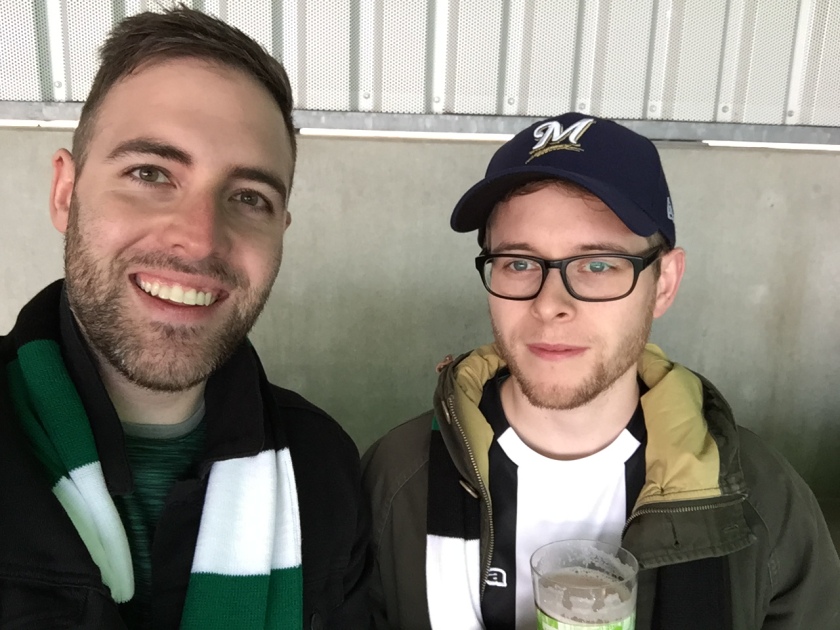